Blood of the Conqueror, Conclusion: A Last Mad Act

Editor’s Note: I want to thank everyone for reading this series and for being loyal readers to this blog for so many years. For over 3 years now, I’ve dedicated most of my creative energy and thought to GRRM’s world, and I thank him for creating a world that I’ve gotten to play in. However, it’s time for me to refocus my energy on my own works of fiction that I’ve put on hold. As a result, this will be the last A Song of Ice and Fire essay that I’ll write before George RR Martin announces the completion of The Winds of Winter.  Once again, thank you so much for reading my essays, and please stick around the blog as our other writers: SomethingLikeaLawyer, Militant_Penguin, MattEiffel and MasterRooseman have lots of great stuff coming your way in the coming months! All the best – Jeff (BryndenBFish)

Spoiler Warning: This essay contains spoilers for The Winds of Winter 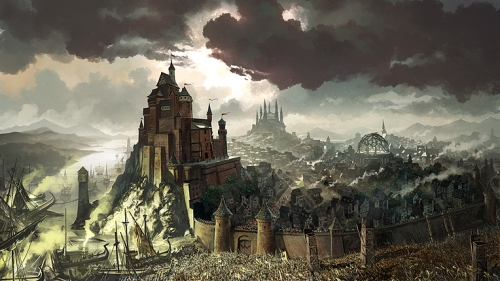 Aerys Targaryen must have thought that his gods had answered his prayers when Lord Tywin Lannister appeared before the gates of King’s Landing with an army twelve thousand strong, professing loyalty. So the mad king had ordered his last mad act. He had opened his city to the lions at the gate. (AGOT, Eddard II)

At long last, Aegon’s Crusade for the Iron Throne would come to King’s Landing at the close of The Winds of Winter. With victories at Storm’s End and against the Tyrells at Westerosi Agincourt and new friends in Dorne, the Reach and the High Sparrow, Aegon would turn towards the great city. The city, though, won’t be easy to take. Even if Aegon showed up to the city with the full strength of the Golden Company, Dorne and the Golden Company’s friends in the Reach, King’s Landing would be nigh impregnable. Behind the strong walls of King’s Landing, Cersei Lannister and her loyalists could withstand a conventional siege or storming of the walls. And though taking King’s Landing was of tantamount importance to the young dragon, his parallel goal was to continue his campaign for legitimacy by enshrining himself in good optics.

In a certain light, Aegon’s coming struggle to take King’s Landing and the Iron Throne finds a strange parallel to that of the victorious rebels of the rebellion which brought down the young dragon’s alleged father and grandfather. Robert’s Rebellion saw many battles fought across Westeros, but to achieve ultimate success, Robert had take King’s Landing and then unite a fractured realm. The former was achieved when Tywin Lannister treacherously sacked the city. The latter was accomplished by Robert’s personality and his marriage to the beautiful Cersei Lannister.

If Aegon’s invasion of Westeros is a pale imitation of Robert’s Rebellion, we’re likely to see something of a mirroring effect of victory after victory in the field for the Young Dragon in The Winds of Winter. But like Robert Baratheon, Aegon would need more than victory on the field to secure his throne. And if Aegon were to take the Iron Throne, he would need to then quickly pacify the realm with good governance and a marriage.

So, towards the end of The Winds of Winter, I expect the young dragon will turn at last to the great city, and it’s here that we’ll see the conflagration of several major point of view characters from A Song of Ice and Fire and the culmination of Aegon’s crusade for the Iron Throne.

END_OF_DOCUMENT_TOKEN_TO_BE_REPLACED

Blood of the Conqueror, Part 10: A Plague of Sparrows

The Seven Gods who made us all, are listening if we should call. So close your eyes, you shall not fall, they see you, little children. (ASOS, Samwell III)

Opposite the Red Keep stands Baelor’s Sept. Within the walls of this massive cathedral lay the beating heart of Westerosi religion: the Faith of the Seven. Governing the form and functions of millions of adherents, the Faith of the Seven was one of the few Westerosi institutions whose reach extended from Dorne to White Harbor. At the pinnacle of this continent-spanning religion was a man known as the High Septon. Serving as Westeros’ version of a medieval pope, the High Septon was a powerful leader of this religion and was seen as the literal avatar of the gods themselves. However theoretically powerful this man was in though, he had practical limits imposed on him by Westeros’ history. A bloody war and the reforms of a Targaryen king had restrained the High Septon and curbed the power that the Faith of the Seven once held. By the start of A Game of Thrones, the Faith of the Seven had morphed into a placid, peaceful religion with a fat, corrupt religious elite presiding over the faithful, but this was about to change.

Within the span of two years, the country had seen its relative stability and peace evaporate into chaotic warfare. The War of the Five Kings had devastated the country, and it was not the warfighters who suffered. The smallfolk had borne the brunt of this war, and the brutalities inflicted on them upended the social fabric of Westeros. One of the chief victims of this upending of the social fabric of Westeros was the Faith of the Seven

Where once the Faith of the Seven had been a conservative, milquetoast part of society, the War of the Five Kings radicalized the religion. Standing atop this new movement was a man who would become known as the High Sparrow. And he was looking at the historical structure of the Faith of the Seven and seeing the power that the Faith once wielded.

END_OF_DOCUMENT_TOKEN_TO_BE_REPLACED 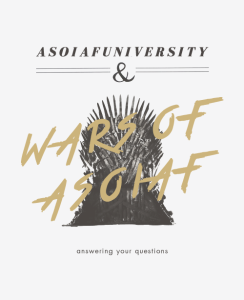 As you may or may not know, Wars and Politics of Ice and Fire has its own Tumblr page (as well as its own Twitter and Facebook pages).  Even more excitingly,  we here at the blog have partnered with ASOIAF University to answer questions about A Song of Ice and Fire.  We – that is, NFriel and myself – take the text-based questions submitted to us, write up thoughtful text-based answers, and publish these answers on the Tumblr.

So every Monday we present to you The Ravenry.  We collect the questions we’ve answered during the previous week over on the Tumblr in post form, with a brief description of each, and publish it here, and link that post on Twitter and Facebook as well. The Queen Regent and the Lord Hand had their most productive week yet, discussing everything from books in Westeros to marriages and beddings. Plenty of hypotheticals and theorycraft, there’s certainly something for everyone this week.

Here’s The Ravenry for the week of September 28th: