Part 2: Proposals to the Crown

In part 1 of this essay series, I used Keynesian economics to define the major economic problems facing Westeros. The major issues characterized in part 1 were the lack of a central liquidity vendor, major debts, ineffective demand cycles, inefficient population distribution, and instability in the Riverlands. In part 2, I will make proposals to address these problems.

END_OF_DOCUMENT_TOKEN_TO_BE_REPLACED

Tagged as Economics, Economics of Westeros, Game of Thrones, Keynesian Economics, Wars And politics of ice and fire

Westeros has been economically stagnant for thousands of years. Since the Age of Heroes the infrastructure, finances, and prosperity of the realm have crawled along with only incremental advances that benefit the populous. So, what disease is Westeros suffering from?

In this essay, I will define the economic problems facing Westeros and provide policy proposals that will lead to a more optimal steady state for the Westerosi economy. In Part 1 of this essay series, I will begin by using Keynesian Demand Economics to explore the more systemic issues facing the economy of the Seven Kingdoms.

To achieve that end, in Part 2, I will build on Keynesian Economics by using the 3-equations model to provide context for economic implications on policy. Both of these models will portray why and how certain policies will move the economy of Westeros to a more optimal steady state.

But before we get to the problems facing Westeros, let’s take a brief look at the history of the methodology.

Tagged as A Song of Ice and Fire, Game of Thrones

Without further ado, here’s The Ravenry for the week of March 7:
END_OF_DOCUMENT_TOKEN_TO_BE_REPLACED

George RR Martin’s Notablog is the subject of much analysis and scrutiny. This nearly eleven year-old blog on livejournal has been the subject of GRRM’s thoughts and musings for many years. However, most of the blog is not focused on ASOIAF. The parts that are focused on ASOIAF are exceedingly interesting as they provide windows into how GRRM writes ASOIAF, development of plot points and other fascinating windows into the world of ice and fire.

So, here you have it: the complete Notablog ASOIAF Resource. I’ve reviewed every notablog entry and GRRM comment in his notablog. So, here, you’ll find every single time GRRM talked about ASOIAF both in blog posts or comments. I’ve grouped the posts by subjects such as:

My intent for this resource is to serve as the So Spake Martin for all of GRRM’s notablog entries and comments that are related to ASOIAF. I’ve bolded the entries I think are the most interesting (But opinions vary!)

So, without further ado, let’s delve into everything!

END_OF_DOCUMENT_TOKEN_TO_BE_REPLACED

Tagged as A Dance with Dragons, ASOIAF Resource, Dunk and Egg, Game of Thrones, GRRM, Notablog, The Winds of Winter, The World of Ice and Fire, TWOW

What if Season 5 Was Good, Like Really Good? (Winterfell, Meereen and Dorne) — Corrected! 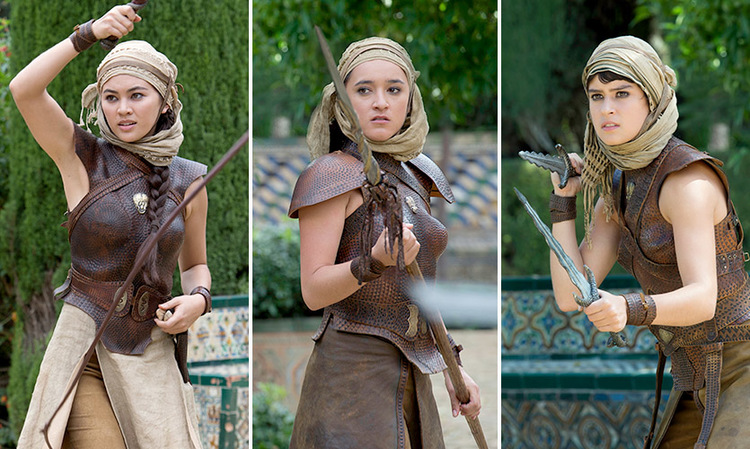 Part 1 dealt with storylines we thought were the best in Season 5, but for every good storyline, there’s always the bad one (the bad pussy one). Today’s podcast episode delves into the worst storylines of Season 5. From underwhelming battles to poor dialogue to convoluted motivations, we explore:

But instead of criticizing the show, we offer ideas to make it better. At the end, we give a few thoughts on where we think Season 6 might go!

Agree or disagree, and let us know your thoughts on Season 5 and what you would have done to improve it in the comments below!

You can also listen to us at itunes or podbean.

What if Game of Thrones, Season 5 was Good, Like Really Good? Part 1: King’s Landing, Braavos and Castle Black

Game of Thrones Season 5 is the most controversial season of the show so far. Many factors went into this. Whether it was the show perhaps passing the books in some storylines, the show’s deviation from the source material or the way that the show adapted scenes from the books, fans had mixed reactions to the season. In this podcast episode, we delve into Season 5. But instead of simply hating on the show, we talk about the parts of the season that we liked. And we liked some of it quite a lot. But there was some that we didn’t like.

In this 1st of 2 parts, we talk about 3 locations, the 3 locations that we thought had the best plot-points from Season 5:

We also mentioned the 2016 ASOIAF calendar during our intro which can be purchased here!

So, listen to us here or at the following spots:

Thanks so much for listening, and let us know what you think! Were our criticisms fair, accurate? Did our changes make sense? What changes might you make?

Final note: We’re coming up to our 10th(!!!) episode, and we all thought it might be fun if in our 10th episode, we answered any questions or addressed any theories that you all might have for us on the blog. So, if you have questions about ASOIAF (or really anything, within some reason) or a theory that you’d like to get our opinion on, leave a comment below to this post or send us an e mail at warsandpoliticsoficeandfire@gmail.com, and we’ll answer or discuss anything you all want to hear analyzed or discussed!

Wars and Politics of Ice and Fire Podcast #1: The Dragon’s Mercy: The Violent Future Path of Daenerys Targaryen Part I: Children & Prophecy

Tagged as A Dance with Dragons, A Song of Ice and Fire, Daenerys Targaryen, Game of Thrones, Meereen, The Winds of Winter, TWOW, Yunkai

The Battle of Ice with History of Westeros Part 3

Check out some History of Westeros’s other awesome podcasts!

Tagged as A Dance with Dragons, A Song of Ice and Fire, Battle of Winterfell, Game of Thrones, Stannis Baratheon, TWOW

The Spider’s Greatest Intelligence Failures or Something Else?

“I served Lord Arryn and Lord Stark as best I could. I was saddened and horrified by their most untimely deaths.” (ACOK, Tyrion II)

Lord Varys was feared throughout the Seven Kingdoms on account of his inexplicable ability to gather any and all information. The whispers, as he called it, were the lifeblood of his work and kept nobleman and commoner alike in fear of what Varys could report to the king and his small council. And the man was effective. High and low treason was discovered and punished. The activities of ships captains, high-born ladies, great lords and mountain clansmen were all monitored by Varys through his vast intelligence network.

But despite Varys vast network of little birds, there were major intelligence failures — two of which will be the focus of this analysis.

1. Did Varys know of Jon Arryn’s poisoning, and if he did, why did he stand aside and allow it to occur?

2. More importantly for the main story, how did Varys not hear whispers of Eddard Stark’s execution?

Both of these questions have perplexed me in my current re-read. The easy answer is that Varys and his intelligence network were fallible, but in light of information from all 5 books, I think the answer is much more muddled than a simple lapse in intelligence.

END_OF_DOCUMENT_TOKEN_TO_BE_REPLACED

Littlefinger: The Gambling Man and the Master Player Part 2: The Maniac

“Always keep your foes confused. If they are never certain who you are or what you want, they cannot know what you are like to do next. Sometimes the best way to baffle them is to make moves that have no purpose, or even seem to work against you.” (ASOS, Sansa V)

When I was younger, I had delusions of playing poker professionally. After losing money early on, I tried to figure out what I was doing wrong. So, I read books to improve my game. While I was never able to really turn a profit in playing, I did learn about the various styles of play which made the actual pros tick. One of those styles of play is known as loose-aggressive. Loose-Aggressive players (sometimes pejoratively known as maniacs) play a lot of the hands dealt to them no matter the strength of the cards in hand. In this way, they consistently keep other players guessing what the true strength of their hand is.

If Littlefinger were a poker player, he would be a maniac. Like me, his early forays into the game resulted in losses for him — a scar and a broken heart being the most prominent. Unlike me, his later maniac style of play netted huge personal profits. But how did Littlefinger achieve this feat? We’ll pick up the story chronologically from part 1. I’ll talk about the knife and Littlefinger’s early intrigues of the court with Ned as Hand.

END_OF_DOCUMENT_TOKEN_TO_BE_REPLACED

Wars and Politics of Ice and Fire
Blog at WordPress.com.