Blood of the Conqueror, Part 8: To The Spears

This essay contains minor spoilers for The Winds of Winter

“It is an easy thing for a prince to call the spears, but in the end the children pay the price. For their sake, the wise prince will wage no war without good cause, nor any war he cannot hope to win.” (ADWD, The Watcher)

From his vantage point overlooking the Water Gardens, Doran Martell looked at the children at play in the pool below. To his side lay a letter from King’s Landing informing the Prince of Dorne that his brother was dead at the hands of Gregor Clegane. All around him, overripe blood oranges ominously fell from trees, giving off a sickly-sweet odor as they split open upon impact. While Doran watched, Dorne was angry — angry at the recent death of Oberyn Martell, angry at the murders of Elia Martell and her children at the end of Robert’s Rebellion. Doran Martell knew all this, and yet from all appearances, he did nothing.

The reality, though, could not have been more different. Doran Martell was doing something to avenge his lost loved ones, but the prince could not seek the immediate vengeance that his family and countrymen wanted. The Prince knew that if Dorne went to war against the Iron Throne, they would lose, and if they lost, it would be the children who would suffer.

However, events had finally shaped up to the point where Doran Martell felt that he had his chance to truly strike a blow for vengeance all the while avoiding deaths like those of his sister and her children so many years before.

END_OF_DOCUMENT_TOKEN_TO_BE_REPLACED

Tagged as A Dance with Dragons, A Feast For Crows, A Song of Ice and Fire, Arianne Martell, Blood of the Conqueror, Doran Martell, Dorne, Sand Snakes

What if Season 5 Was Good, Like Really Good? (Winterfell, Meereen and Dorne) — Corrected! 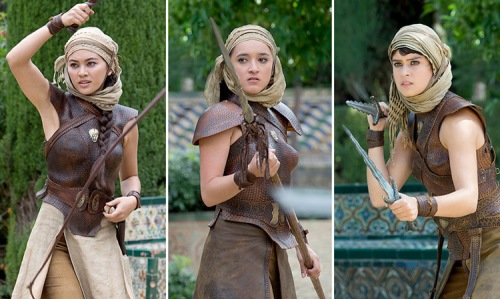 Part 1 dealt with storylines we thought were the best in Season 5, but for every good storyline, there’s always the bad one (the bad pussy one). Today’s podcast episode delves into the worst storylines of Season 5. From underwhelming battles to poor dialogue to convoluted motivations, we explore:

But instead of criticizing the show, we offer ideas to make it better. At the end, we give a few thoughts on where we think Season 6 might go!

Agree or disagree, and let us know your thoughts on Season 5 and what you would have done to improve it in the comments below!

You can also listen to us at itunes or podbean.