Wars and Politics of Ice and Fire Podcast, Episode 10: The Book That Never Was

In early 2015, Harper Collins UK in conjunction with Waterstones, a British Book Retailer, released pictures of a letter that George RR Martin wrote to his agent Ralph Vicinanza in 1993 outlining his idea for this brand new book that he was writing entitled A Game of Thrones, the first book in an exciting new trilogy that George RR Martin was calling A Song of Ice and Fire. This early letter provided insights to George’s agent on how he could promote this new series as well as provided a plot diagram for where GRRM thought that  A Game of Thrones  and A Song of Ice and Fire were going.

In Episode 10: The Book That Never Was, we do a detailed analysis of this letter and the book that could have been had GRRM written A Song of Ice and Fire to follow his initial diagram. We cover the topics of:

Listen to us here or at:

Find us on social media!

Blood of the Conqueror, Part 3: The Conspiracies 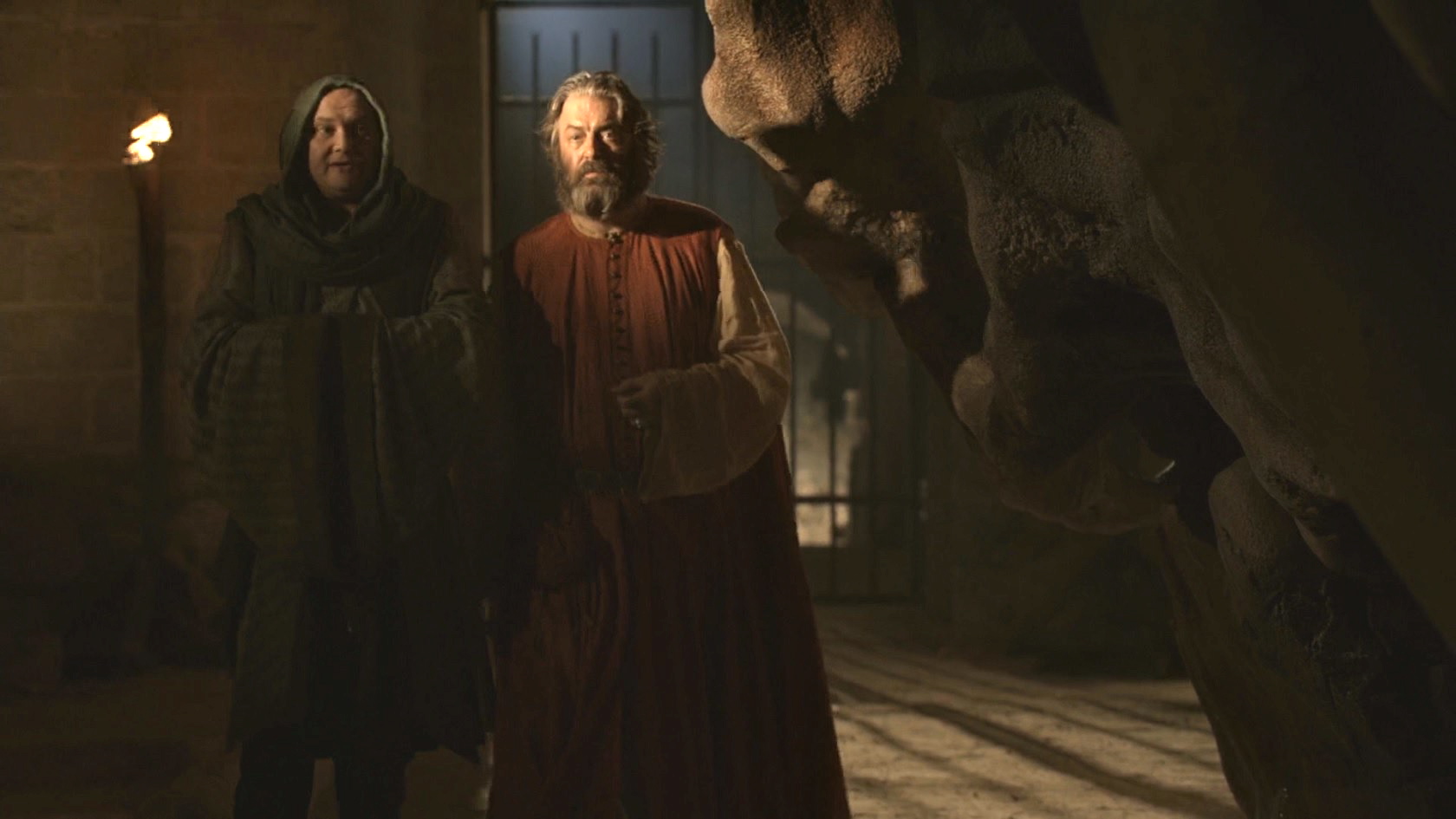 Disaster. Aerys and Rhaegar Targaryen were dead, Viserys and Daenerys were fled, a new powerful Baratheon regime was in power in King’s Landing and – most importantly for our purposes – Varys and Illyrio’s first conspiracy against the Targaryens had catastrophically failed. This failure could be partially attributed to Varys overplaying his hand by pushing Aerys too far towards paranoia and rash action, but the greater part of this failure was Varys’ inability to take the human element into account.

As we’ll see in Part 3, however, this was a failure that was not unique to Varys. Varys and Illyrio would engineer new schemes in Essos to elevate Aegon, the Bright-Black Dragon, onto the Iron Throne during the main timeline of A Song of Ice and Fire. Fearsome sellswords, known as the Golden Company, would be the cornerstone of Illyrio’s efforts. Prince Viserys Targaryen would also feature prominently early on, but as Illyrio’s conspiracies evolved, his attention would shift to Daenerys and her three adolescent dragons. But above them all was the boy and the conspiracy to put this dragon onto the Iron Throne.

But as Varys discovered in Westeros, Illyrio would find the human element interfering with his well-laid plans time after time.

END_OF_DOCUMENT_TOKEN_TO_BE_REPLACED

Blood of the Conqueror, Part 1: A Winds of Winter Mystery in the Stormlands

Spoilers Warning: This post contains spoilers for The Winds of Winter

Prince Aegon spoke. “Then put your hopes on me,” he said. “Daenerys is Prince Rhaegar’s sister, but I am Rhaegar’s son. I am the only dragon that you need.” (ADWD, The Lost Lord)

Aegon Targaryen, the purported son of Rhaegar Targaryen and Elia of Dorne, is set to have a fateful impact on Westeros in The Winds of Winter. His landing in the Stormlands sets Westeros on a path that brings more war, and Aegon’s future promises more suffering, and more destruction for an already war-ravaged kingdom. But that reality will be offset by a public perception that will likely view Aegon as the conquering hero and liberator of Westeros. But who is Aegon? Who are his supporters? What are his and their goals? And what exactly will that fateful impact look like?

Welcome to Part 1 of Blood of the Conqueror, a speculative analysis of the coming Winds of Winter arc of the Young Dragon, Aegon Targaryen. In this essay series, we’ll examine  Aegon’s impact on Westeros. To do so, we’ll examine the background, conspiracies, alliances and battles that look to dominate Aegon’s arc in The Winds of Winter.

In a later installment, I’ll do in-depth battle analysis of the Battle of Griffin’s Roost and the Golden Company’s landing in the Stormlands, but in today’s essay, I thought it might be fun to examine this event in the meta-venue of how A Dance with Dragons and The Winds of Winter were written and re-written. And I thought it might be fun to do so by examining a minor mystery that I came across while reading George RR Martin’s notablog. It’s a mystery that takes place in the Stormlands around the time that Griffin’s Roost fell, and it involves how George RR Martin originally structured this event in A Dance with Dragons and why one of Martin’s famous restructurings of A Dance with Dragons might reveal how GRRM originally planned Aegon’s invasion of Westeros and why a key rewrite makes Aegon’s invasion and the involvement of a major player in the game of thrones that much more poignant.

END_OF_DOCUMENT_TOKEN_TO_BE_REPLACED

The Dragon’s Mercy: The Violent Future Path of Daenerys Targaryen, Part 4: The Embers of Essos

Editor’s Note: This post contains spoilers for The Winds of Winter. If you haven’t already, please check out the first 3 parts prior to reading this part, check ‘em out! (Part 1, Part 2, Part 3)

Mercy, thought Dany, They shall have the dragon’s mercy (ADWD, Daenerys II

Fire and blood. Dany’s arc in A Dance with Dragons ends with her recognition that dragons plant no trees and that her words are “fire and blood” – not just as the house words of her dynasty, but as her personal motto validating her rediscovered turn towards the mother of dragons and a violent vision of prophecy.

In The Winds of Winter, that recognition and acknowledgement of her true self will morph into action. Early through her Winds of Winter arc, she’ll bring her mother of dragons persona and vengeance to Khal Jhaqo & the Dothraki. But after she unites a giant khalasar by fire and blood, she’ll turn her dragon’s mercy to Meereen. Nor will her full wrath end at the pyramids of Meereen. Instead, I believe that the city  will be a mere stepping stone to the full expression of the dragon’s mercy.

Aiding Daenerys in her conquest will be new advisers and groups whose personalities and aims look to keep Daenerys’ footing firmly tied to her identity as the mother of dragons.

END_OF_DOCUMENT_TOKEN_TO_BE_REPLACED

A new podcast that I’ve really enjoyed listening to is Radio Westeros. Recently, they interviewed me about STANNIS BARATHEON in which I got to wax ineloquently on Stannis’ military prowess, flexibility and I got to talk a little about the blog itself! So, check it out!

Tagged as A Song of Ice and Fire, Battle of Winterfell, Stannis Baratheon, The Winds of Winter, War of the Five Kings, Westeros

The History of Westeros: Battle of Ice Part 2

The Spider’s Greatest Intelligence Failures or Something Else?

“I served Lord Arryn and Lord Stark as best I could. I was saddened and horrified by their most untimely deaths.” (ACOK, Tyrion II)

Lord Varys was feared throughout the Seven Kingdoms on account of his inexplicable ability to gather any and all information. The whispers, as he called it, were the lifeblood of his work and kept nobleman and commoner alike in fear of what Varys could report to the king and his small council. And the man was effective. High and low treason was discovered and punished. The activities of ships captains, high-born ladies, great lords and mountain clansmen were all monitored by Varys through his vast intelligence network.

But despite Varys vast network of little birds, there were major intelligence failures — two of which will be the focus of this analysis.

1. Did Varys know of Jon Arryn’s poisoning, and if he did, why did he stand aside and allow it to occur?

2. More importantly for the main story, how did Varys not hear whispers of Eddard Stark’s execution?

Both of these questions have perplexed me in my current re-read. The easy answer is that Varys and his intelligence network were fallible, but in light of information from all 5 books, I think the answer is much more muddled than a simple lapse in intelligence.

END_OF_DOCUMENT_TOKEN_TO_BE_REPLACED

Noble as a King: An Examination of Hoster Tully Part 2: Thank the Gods for Old Lord Hoster

In part 1, we examined Hoster Tully’s actions before the A Song of Ice and Fire series began. 3 years before the beginning of A Game of Thrones, Hoster Tully became bedridden with a serious illness to the stomach. Despite this infirmity, Hoster was sitting comfortably, having married his two daughters to the Starks and the Arryns. Even more than this, he had the gratitude of the sitting king, Robert Baratheon. But like the wasting disease threatening his life, trouble on the horizon threatened to erode the successes that Hoster had worked so hard to achieve.

END_OF_DOCUMENT_TOKEN_TO_BE_REPLACED

Noble as a King: An Examination of Hoster Tully Part 1: Family, Duty, Honor

Hoster Tully was the least-seen Lord Paramount in A Song of Ice Fire and yet one of the most consequential characters in the series. In A Clash of Kings and A Storm of Swords, we witness his declining health and death, but this belies a staggering influence that far outstrips his scant textual appearances.

Even in dying, Hoster retained a mind for the game of thrones. George R. R. Martin paints a picture of a Lord with no small amount of cunning, adept at playing the political game in a way that neither Ned Stark nor Robert Baratheon ever could. While not the master manipulator of people like Varys or Littlefinger, Hoster Tully had a keen understanding of feudal politics that served his family well while he was alive. While Doran Martell and Tywin Lannister receive accolades for the political acumen both from in-universe characters and from readers of the series, a careful analysis suggests that Hoster Tully was clever in his own right. In fact, Hoster Tully managed to raise the Tully family to the highest heights of its power it had seen in a single generation.

Family was the first of the Tully words and first in Hoster’s mind. Accordingly, he was blessed with two healthy daughters and one son. The daughters, he married to houses of ancient nobility and unquestioned honor. The son was destined to rule Riverrun. But much as healthy families have strains, so too did Hoster have strains in his own family. He and his only brother, Brynden, were on less-than-cordial terms. But even with this strain, the Tullys were one of the most successful families in Westeros.

It raises the question: Where did it all go wrong? How did Hoster succeed so much in his lifetime, only to have his strategy fail dramatically so shortly after his death?